"This way of painting
has changed my life,
it has been a revelation "

Beppe Mokuza Signoritti is a Zen monk belonging to the Soto Zen tradition of Buddhism and is a disciple of Zen Master Roland Yuno Rech. Beppe is the founder of the Zen Dojo “Bodai Dojo” located in Alba, northern Italy.

For almost thirty years he has dedicated himself to Sumi-e and the practice of Zen meditation, exhibiting his works, holding conferences and giving practical demonstrations throughout Europe.

Since the beginning of his spiritual path Beppe Mokuza combines the practice of Zen with Sumi-e. He has trained under the guidance of expert masters in France (Zen Temple of the Gendronnière), Switzerland (Zinal) and in Italy (Turin) at the Zen Dojo Mokusho where he received the transmission of Sumi-e painting method by the Zen monk Ezio Tenryu Zanin. In Torino he also learned the technical aspects of Chinese ink painting from three Japanese masters.

He exhibits his works, holds conferences and workshops in informal locations addressing his teaching to a wide audience including non-experts and lay people. He welcomes anyone who is interested in trying this “new” and particular type of artistic expression.

Since 2001 Master Mokuza teaches Sumi-e, Zenga technique and Suybokuga painting to groups of children, teenagers, adults and people with physical and mental disabilities.

In 2006 he held his first workshop in a foreign country. Nowadays he travels throughout Europe spreading Sumi-e, organizing workshops and many different events in France, Switzerland, Germany, Holland and Belgium.

It is interesting to note the intense activity in the Netherlands. He visits Holland three times a year creating opportunities for practicing Sumi-e and Zen meditation in Rotterdam, Haarlem, Utrecht, Amsterdam and Katwijk at the Sufi Temple “Universal Murad Hassil”.

Other examples of his many travels abroad are in Germany at the Aikido Dojo in Bochum and near Stuttgart in the Filderstadt Kunstschule.

The strong and dynamic energy of Beppe Mokuza can be witnessed in his participation of events dedicated to meditation and art which are organized at the Zen Temple “La Gendronnière” situated 200 km South-West of Paris. This Temple was founded by Master Taisen Deshimaru (first Zen Patriarch in the West). Since 2010 Beppe Mokuza has travel to La Gendronnière three times a year to hold courses on Sumi-e.

Other events organized in France are the Sumi-e workshop in “Gyobustuji” (Zen Temple in Nice), as well as events in Mulhouse, Toulouse and Chalon-sur-Saône.

During this Festival, Beppe Mokuza offers concerts of sutra-singing in combination with moments of collective Zen meditation, live Sumi-e demonstrations, and conferences on Zen Buddhism and Sumi-e painting. These activities are attended every year by thousands of people.

Since  2009 he has dedicated himself especially to the training of his students who come from all over the world to the Zen Dojo “Bodai Dojo” in Alba where he is based  and attend the residential workshops organized each year. These events last ten days and offer a very special and intense opportunity to train in Sumi-e and Zen meditation.

Sumi-e is not just painting, it is an art that represents a way of living 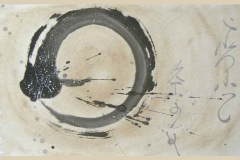 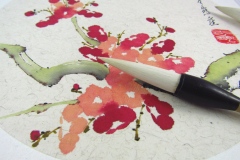 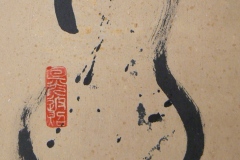 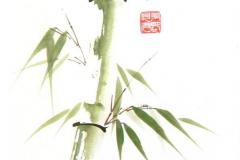 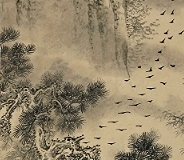